Liza Trager Stanhope faces a crisis when her mother-in-law, Estelle is diagnosed with breast cancer. When she and her husband learn that Estelle has known of the cancer for five years and has refused to see a doctor, and worse, that now that it is known, is reluctant to take the necessary treatments, all the ills of their relationship also come out into the open.

In Don’t Tell Anyone, Laurie Boris explores the intricacies of human relationships in a way that is both educational and entertaining. A frank discussion of the ‘forbidden’ topics; the things that are either never spoken of, or that are reduced to initials – like, the Big ‘C’ – is handled in a way that makes it easier to accept.

Boris had created a cast of characters that readers can identify with; from the fiercely independent Liza to the obstinate, but fearful Estelle; and moreover, care about. Raw human emotions are on display, seen through the eyes and thoughts of the characters themselves. This is not a ‘preachy’ story. But, it delivers a powerful message nonetheless, which is what an expertly written novel should do. The message delivered, most of all, is the power of the human spirit. Kudos to Laurie Boris for a story well told. 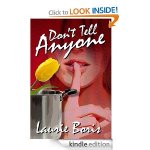