Tahoe PI Owen McKenna gets a strange call from a woman who says she fears for her life. He thinks she’s paranoid, and a bit batty, but plays along. When she’s gunned down on her balcony right before his eyes, though, he realizes she was serious—and, now she’s seriously dead—and the only clue she left that might help determine who killed her, is a cryptic note, ‘Medic’ BFF.’. When two more people turn up dead, and someone starts taking potshots at him, McKenna knows something is really wrong. When he starts putting the pieces together, he learns that the dead people all had one thing in common, they were looking for a priceless Italian artifact, the Blue Fire of Florence diamond, and that someone is willing to kill for it.

Tahoe Blue Fire by Todd Borg is a PI mystery that will keep you turning pages until the breathtaking conclusion. You’ll love the characters, flaws and all. Owen McKenna is the new age’s Sam Spade without the attitude. I give it four stars.

One thought on “Review of ‘Tahoe Blue Fire’” 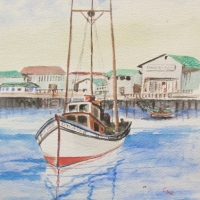