Insurance claims investigator Harry Reese, and his wife Emmie, are off to Washington, DC to investigate a series of burglaries of jewelry from several prominent citizens of the District. Harry knows, though, that since Emmie has insisted on accompanying him there’s likely to be corpses involved because the woman is absolutely fascinated by the prospect of finding bodies littering the scene.

What they find after arriving is far more than simple insurance fraud. Harry finds himself neck-deep in a land speculation scheme and a series of murders that stretch from New York City to the nation’s capital.

Kalorama Shakedown by Robert Bruce Stewart is a humorous mystery set in Washington, DC shortly after the assassination of President McKinley. Rich in historical detail of the era and populated by an intriguing cast of the most unusual characters a reader could ever imagine. Follow Harry as he wends his way through a maze of clues, misdirection, and missteps – until he finally stumbles his way to the answer.

A tantalizing tale filled with surprises from beginning to end.

I’d like to give this one five stars, but a few too many formatting errors knocks it down to four. Still, though, a thoroughly enjoyable read. 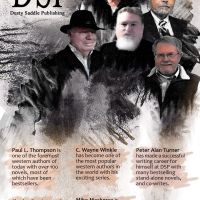